मदद
Version History
Lines of the poem Pyaar Kaa Naataa by Vinod Tewary have been used for images below.


Yati feature in Maapnee. When a space is there in the given meter pattern (example: 21222122 21222122), indicating Yati or pause, software will assess if the poem lines also have a word ending at that position and it will be visualised with a thick blue line.

Meter pattern (Maapnee) can be entered in first line of poem box (example: 21222122, or २१२२२१२२) and poem will be visualized. Even in the absence of a pattern, by default 1+1 is depicted as a fainter green (meaning, it is like 2), and 1 alone is depicted in blue. Color coding by rhyme moved to options.


Software detects rhyming lines and shows the rhyming ends in a different color. This might help the user notice the rhyming patterns in a poem and where the pattern is breaking.


Enabled user to select fixed-width vs flexible visualization. This can be helpful specially on the mobile where there is little screen space and the mobile can be easily rotated to change screen-width.


Internal: size of visualization adjusts automatically as per screen width.


Internal: poem processing and visualization (Rhythmin-verse) code has been made Object-oriented -- a shift from purely a collection of functions and an array which holds the processed poem.

The visualization was simplified because so many shapes and colors may cause needless coginitive overload for the user who needs to focus on her poem. The visualization is meant to assist her, not distract her from her focus. (details)


Ghazal feature. When the user activates the Ghazal feature, the software detects Radeef and Kaafiyaa and shows it in the visualization. (details)


Shabd Sampadaa - Hindi thesaurus. Geet Gatiroop now connects to a Hindi synonyms database. This enables the user to search for other words of the same meaning and look for replacements appropriate for meter or rhyming or other her other expression objectives. This has been called Shabd Sampadaa. (details)


User's poems are saved on the server in user's account. (details)


Free-verse feature. When the user activates the Free-verse feature, the software enables the user to connect multiple lines of the poem to get the composite maatraa value for those lines. The user can also mention what the base meter count of the poem should be. The software then shows how the maatraa count of the composite lines is as multiple of the base meter. (details)


First version of Geet Gatiroop launched. Software displays alphabets as per the maatraa applicable. The user can shorten the maatraa for 2-maatraa alphabets, and change the maatraa for half-letters. User can visually see the structure of the poem. If the lines of the poem have uniform maatraa the image created is of uniform width.

Shape of the boxes indicate vowels used (plain rectangle for अ and आ, trangle for इ and ई because they have a pointed sound, and so on.)

Colors are determined by the consonants as per the Devanagari Varnmala. क ख ग घ in one color, because they sound similar, च छ ज झ in another color etc. 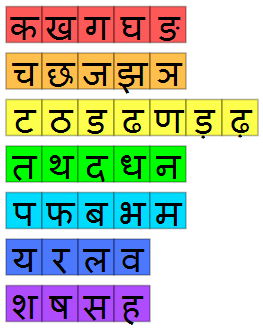